The face of the Ladakh Tourism, the white-dome Shanti Stupa was built in 1991 by Japanese Buddhist Bhikshu, Gyomyo Nakamura as a part of the Peace Pagoda mission. Located at an altitude of 3,609 metres (11,841 ft), Shanti Stupa can be reached by car or by climbing a series of 500 steep steps to the hilltop. It was created to promote world peace and prosperity and to commemorate 2500 years of Buddhism. 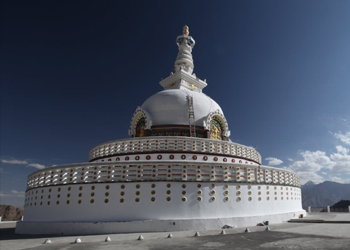 The stupa is a symbol of the ties between the people of Japan and Ladakh. Within the stupa, there are relics of the Buddha, enshrined by the 14th Dalai Lama. The stupa is spread over two levels. First level has Buddha idol, and second features relics depicting the “birth” of Buddha, the death of Buddha (mahanirvana) and Buddha “defeating the devils” while meditating. Both levels feature a series of smaller meditating Buddha reliefs. The beautiful positioning of this stupa provides a breathtaking panoramic view of the surrounding landscape. Nearest landmark to the Shanti Stupa is Leh Palace. Do remember to click some amazing pictures against the backdrop of the stupa. From here, the view of Leh is extremely beautiful. Visitors can also explore the market nearby the Shanti Stupa to pick some local handicrafts.

The tourists can visit the stupa between 5:00 a.m. and 9:00 p.m and it is open all 7 days. The stupa looks best at night, when it is beautifully illuminated with glittering lights.