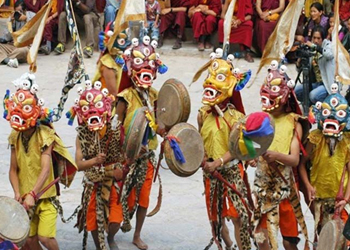 People take a holy dip into the sacred river, put in their best costumes and pay homage to the Mighty River for the blessings on the occasion of Sindhu Darshan Festival. The term Sindhu Darshan means the witnessing of the River Sindhu. The river itself is considered as God and men and women offer flowers and fruits to worship the Great River. This day comprises of a series of spiritual processes for the sanctification of the soul. It is a way of offering water to the soul of the dead. There is an age old belief that doing this act in the River Indus would permanently release the soul from the clutches of the worldly bonds. River Indus is said to be the largest River in India. It derives its origin from the South Western part of Tibet and enters into the Indian Peninsula through Ladakh or Leh. The name Sindhu initiated from the Sanskrit language.