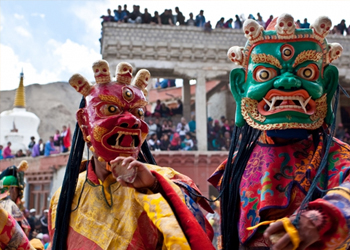 The dance consists of Chhams in which the lamas form the circles with large colorful masks. This circular movement is often accompanied by drum beats, long pipes and cymbals. The masks are usually made from paper mache and there is also a thin coat of plaster enveloping it. This dance drama concludes with sacrificial offerings.