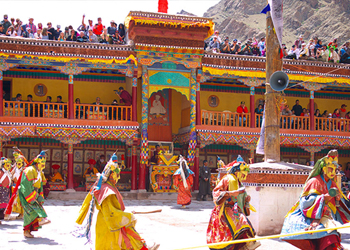 Dedicated to the birth of Buddhist Lord Padmasambhava, who is the founder of Vajrayana Buddhism in Ladakh, Hemis festival is celebrated on the 10th day of the Tibetan lunar month. Evident from its name, the celebrations of this renowned festival take place in the Hemis Gompa or monastery, which, along with holding a sacred status, is also the largest of its kind in Ladakh. After the harsh winters, Hemis festival feels like a welcome respite, that lures thousands of visitors to this remote place. And what better way to understand the people and culture of a region, other than its festivals.

Portraying the tales of war between good and evil, the Chams or masked performers dominate the festival with their uproaring dance moves. They are dressed in bright colored attires and paper-mache masks. Synchronization of their dance with the sounds of the traditional music instruments makes the event a lively and joyous affair. The Chams holds a vital place in the Tantric traditions of Buddhism, therefore, is the prime attractions of Hemis festival.

With the rhythmic sounds of and trumpets, cymbals and drums, celebrations of the Hemis festival commences early in the morning. Starting from peaceful prayers and rituals to Lord Padmasambhava as the main ceremony at the first place to the mystic mask dance, which are locally known as Chams, the festival beautifully displays the religious orientation and culture of Ladakh. Visitors who come at this time of the year in Ladakh are amongst the lucky ones as they get to attend such an auspicious festival, besides the unique handicrafts that are sold in a hefty amount at the monastery, can add to their interest. Hand woven dresses, Buddhist idols, jewellery and Tibetan gems are some of the prime attractions of the numerous shopping stalls, temporarily set during the festival.