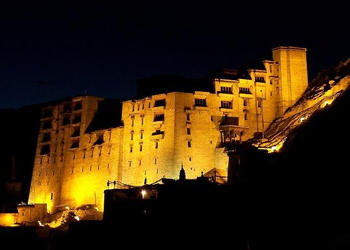 Leh Palace, the former royal residence and known as the ‘Lhachen Palkhar’ is one of the biggest tourist attractions of Leh city was a former royal palace. This palace was constructed during 17th century, under the patronage of King Singe Namgyal. The palace provides fantastic views of the Ladakh mountain range and Stok Kangri as well as town and surroundings. This 9-storey royal edifice is almost in ruins now, but is preserved as a part of Ladakh’s heritage. An example of medieval Tibetan architecture, built of stones, wood, mud and sand, it has massive walls and wooden balconies. The walls of the palace create a comfortable ambiance, and it is cold in harsh summers and warm in the winter days. A victory tower, built in the memory of Ladakhi soldiers, is there towards the top of the palace. Ancient mural paintings adorn the interiors of this palace and speak of its golden bygone era. A statue of Lord Buddha graces the monastery of the palace. In the exhibition hall of the palace, paintings and pictures, which include Tibetan thangka, are displayed. Paintings that are over 450 years old are housed here. Some of these fine specimens were created using colors derived from powdered stones and gems. These paintings retain their rich and vivid appearance till date. The Leh palace conserves a rich collection of crowns, ceremonial dresses and jewellery among others.

Despite the fact that palace is in ruins but few spacious rooms, carved entrances, corridors and small compartments still exist in their original glory. Now the bigger rooms and corridors of the palace have been turned into exhibition halls. Various murals etched on the walls of the palace depict the grandeur of its earlier days.