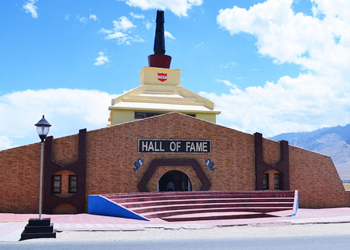 The Hall of Fame is a famous museum which has been constructed by Indian Army. This is a memorial for brave Indian soldiers who sacrificed their lives for their motherland in Indo-Pak wars. The museum is near the town, only 4 km away on Leh-Kargil road.

The Hall of Fame is a two storeyed building which houses a big collection of various kind of weapons used in wars including those which were captured by Indian Army during war. There are also on display various kind of apparels and accessories being used by in Siachen which is considered as highest battlefield in the world. Many soldiers have lost their lives at Siachen because of extreme climate and hostile terrain. Here, temperatures may fall to 60 degrees Celsius below zero, and sudden snowstorms can bury people there in minutes. Only 10 per cent of Oxygen leve is very low and only 10 percent compared to in plains. Pictures in museum display the living accommodation and training process on ice walls which are truly incredible.

There is one section which has collection relating to history and culture of Ladakh. Another interesting feature of the small theatre which runs documentary on “Operation Vijay” which is codename for The Kargil War of 1999.