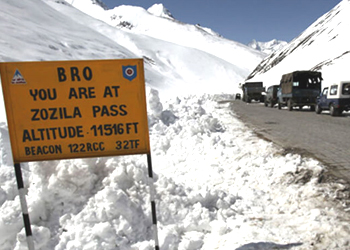 The Zojila Pass ranks as the second highest pass in India subsequent to Fotu La Pass, at an elevation of 11,575 ft (3,528 meters) above the sea level, the pass lies amid Leh in the Western Himalayan Mountain Ranges and Srinagar. Visitors would be travelling between Kashmir basin on one side and Dras on the other, while driving towards Zojila. Besides the lush green Dras valley, Zojila also overlooks snow capped summits and dense jungles. The pass remains closed in the winters due to heavy snowfall and is open for tourists only in the spring. However, the Border Roads Organization (BRO) is trying hard to keep it morotable for the greater part of the year. During the India Pakistan War in 1947, the Zojila Pass was captured by Pakistani aggressors in 1948 in their objective to take over Ladakh. Having a history of being seized by the militants of Pakistan, followed by a rescue war by the Indian army, this gateway holds much significance.