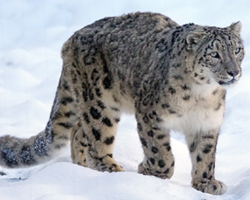 Wildlife in Ladakh is indeed an unparalleled destination, Ladakh is proud of being home to a number of bird species as well as exotic animals roaming freely in their natural habitat. With its barren plateaus and uplands, Ladakh has a distinct alpine, floral and faunal variety. With its notable ecosystem Ladakh gives a chance to wildlife admirer as well as a photography fanatic to view some diminished and most beautiful Ladakh wildlife species with a striking background of the crystal blue lakes, snowy peaks, the dramatic mountains and clear sky creates a picture-perfect frame for wildlife photography.

You can spot Blue sheep, Yaks, Marmot, Tibetan hare, ibex, wild ass, Bharal, the Tibetan antelope, also called the Chiru etc; Ladakh is having approximately 225 species of birds which are often seen in high-altitude wetlands like Tsomoriri Lake. Snow Leopards which is an endangered species and is the star attraction also found in Ladakh.

The largest animal of the cold desert is the yak (dong), a yak wild ox. The yak is used as a beast of burden to carry loads and to plough fields. Yak can weigh up to 1000 Kg and grow to almost 6 feet tall. Yaks have relatively small ears, broad forehead and smooth horns that are generally dark in color. They use their horns in defence. The tail is long. Both sexes have a distinctive hump over their shoulders. Yaks are covered with thick black hair that safeguards it from the intensely cold Himalayan climate. The Yak’s thick hair is used to weave blankets and ropes. Spending its summers at a height above 6,000 meters, Yak herds migrate in winter to better pastures on the lower slopes and return to the high altitude pastures in warmer months. Yaks can survive temperatures of – 40° C. Yaks feed on grass, mosses and leaves. 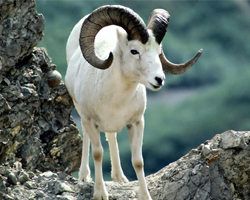 Tibetan Sheep is the chief of all the wild sheep and there are total eight species in India. Nyan is the largest and most wonderful wild sheep; it is also called the Great Tibetan sheep (Ovis ammon). The c Tibetan sheep is copper red in colour and the parts are whitish with black lines. Tibetan Sheep can be viewed in the valleys and in the river of Indus and Shyok. Nyan has big horns. The horns of the nyan measure up to 145 cm and the animal usually remain at a great height, barely descending to a level below 4,500 meters. The size of the Ovis Ammon is 130-190 cm in length. The food for the Nyan is herbs, grasslands and sedges.

Ovis Orientalis are the smallest sheep among all the wild sheep and they are also known as red Sheep. The Ladakhi name of the Ovis Orientalis is Shapo. The body size of the Shapo is 110-150 cm and the weight is around 35 to 90 kg. The horns of the Ovis Orientalis are back curved, crumpled and slim. These sheep prefer the grassy mountain slopes, usually at a height of 3,000-4,000 meters. The Shapo lives in masses and males and females live separately. The meeting of this species is during December-January and around May they give birth to their young ones. The need for protection of the urial is great as they are within easy reach of hunters. There are approximately 1500 Shapo in Ladakh as the population is diminishing. They graze during morning and relax in the evening. During winter, they travel to lower inclines. The Ovis Orientalis is seen in the nearby location of Fotu La, Lamayuru, Rizong, Wanla and Kargil district. 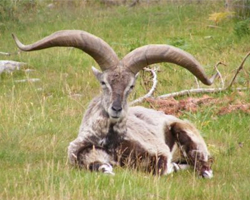 Bharal, a blue sheep can be seen at the height of 6000 feet. Their height is 69 to 91 cm. Body mass of Blue Sheep ranges from 35 to 75 kg. The short, dense coat is slate grey in colour, sometimes with a bluish shine. Bharal are mostly grazers, however at the times of lack of grass that time they change to herbs and shrubs. Due to their magnificent camouflage and the absence of cover in their environment, bharal remain motionless when approached, they can be extremely difficult to spot but, when alarmed, Bharal will bolt swiftly to safety. Bharal are the prey of snow leopards, foxes or eagles.

Snow Leopard is known as Rchan in Ladakh and they are one of the attractive cat species of the world. The hair of the Rchan is dense and soft. The body parts have dark-grey spots on the limbs. The tail of the leopard is thick and it is almost 1/3 of the body length. They are mostly seen in the mountainous region of Ladakh. You can view the snow leopard in Hemis National Park and Zanskar valley. There are overall 250 to 350 leopards in the Ladakh region. They live in the isolated Rocky Mountains and they are found dwelling individually, it can jump up to 6 meters; They hunt various animals like Blue Sheep and Asiatic Ibex, sheep, and marmot. The species of snow leopard has been declared endangered and efforts are being taken to prevent the remaining population of leopards from extinction.