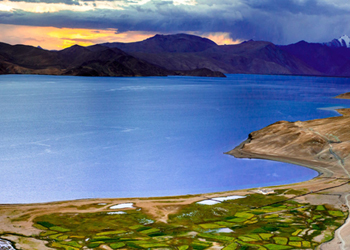 Tso-moriri Lake also known as Mountain Lake is a spectacular site amidst mountain ranges, located in the Changthang (northern plains) with an altitude of 4,595meters (15,075 ft). The Tso-moriri Lake measures about 100 feet average in-depth, from north to south about 28 km in length and about 4-6 km in breadth. With the backdrop of beautiful snow-covered mountains, it is enclosed by barren hills

This valley is occupied by a small population of ‘Changspa’, who are nomadic shepherds. The area is rich in wildlife including the geese flock, wild ass and black necked cranes to the lake side for breeding during the summer months. This peaceful lake and the area around it attract a large range of wildlife including marmots, wild asses, migratory birds and (rarely spotted) Tibetan wolves. Nomadic herders of yaks, goats and cows live in the lake’s vicinity. This place is extremely harsh and difficult to survive in winters. This eye-soothing lake is a must destination for any visitor to Ladakh.