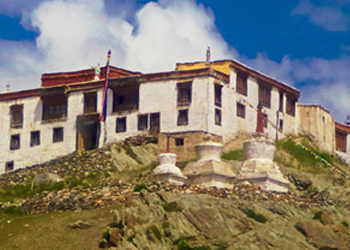 Rangdum Monastery is an old Buddhist shrine and monastic home, is situated more than 130 km away from Kargil. Perched atop a mountain, it looks like a citadel that overlooks and guards the serene valley.

There is ambiguity associated with the origin of this shrine – accounts suggest that the gompa was established in the 8th century while many believe it to be of 18th century. This shrine has a central prayer hall, which is equivalent to a museum due to the rich assortment of Tibetan antiques and other precious artifacts. It is also the residence of about 40 Buddhist monks who can be seen meditating in its tranquil ambience.